VANET or vehicular ad hoc network is the type of network in which vehicles move freely in the network without the help of central controller. Due to its self configuring nature vehicles join or leave the network when they want due to routing, security and quality of service issues may raised in the network. To resolve routing issues in VANET, the three type of routing protocols i.e. : reactive, proactive and hybrid came into existence. In the various researches, it has been analyzed that reactive routing protocols performs well in vehicular adhoc networks. In the study of VANETS, due to decentralized nature of vehicular ad hoc networks, many malicious nodes may join the network which is responsible to trigger various type of active and passive attacks. These attacks reduce network performance in terms of network delay, throughput and packet-loss. There are a number of good topics in VANET for thesis and research. 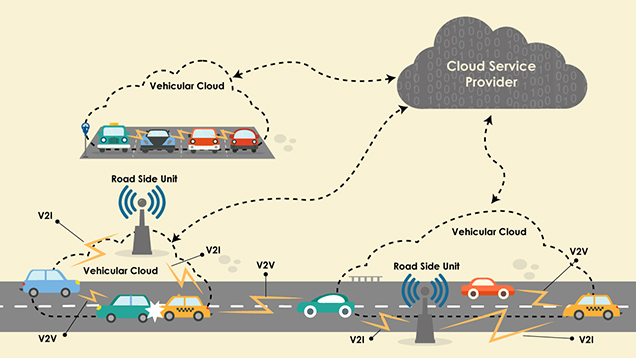 In the network, two type of communication is possible, the first type of communication is vehicle to vehicle and second type of communication is vehicle to infrastructure. The Sybil attack is the common type of attack which is possible in vehicular adhoc networks. In the Sybil attack malicious nodes change its identification multiple time, due to which on the destination node denial of service occurred which effects network performance. In the recent times, various techniques has been proposed to provide security to vehicular adhoc networks. It is estimated that the first systems that will incorporate VANETS for operating their modes smoothly are police and fire vehicles. This technology will help them to communicate with each other for safety measures.

Those looking for good topic in networking for M.Tech thesis, VANET is a good choice. It is the area which is yet to be explored.

In VANET, moving cars act as the nodes which in turn connect with other nodes to create a network for communication. The moving cars automatically becomes wireless router thereby allowing cars within a range of about 250 m to connect with each other creating a mobile network. As cars move out of the range, other cars can join immediately. VANET is a part of Mobile ad hoc Network.

Types of routing in VANET

There are various routing protocols used for communication in vehicular ad hoc network. The routing protocols for MANET can be applied to VANET after some modifications. There are three topology driven protocols namely proactive, reactive and hybrid. In proactive protocol, the nodes update their routing table continuously with information regarding new routes. On the other hand, the reactive protocol updates the routing table only when required. Following are the types of routing in VANET:

There are threats to Authenticity, Confidentiality and Availability of resource in VANET. Attackers can break into the network to hack valuable information from the network. There is also threat to personal security as the location of vehicle can be traced. An attacker can block the network to prevent users from communicating with each other.

There are various topics for masters and PhD thesis on VANET. Here is the list of latest thesis and research topics in VANET(Vehicular ad hoc Network):

VANET is a good topic of choice for M.Tech thesis in the networking field. Techsparks provide thesis guidance and assistance in this field of networking. You can contact us for thesis-related help on VANET.